The Charger is their new offer containing all the “know-how” in a beginner-to-progression glider that it is easy to fly and has remarkable performance. Source: www.ojovolador.com (Daniel Crespo V.)

The Czech manufacturer Mac Para has been strong in the paramotor world for years, with multipurpose models for beginners like the Eden series –a free flight wing available with paramotor risers–, more advanced reflex models like the MacJet (which we tested a few years ago), or the amazing T-Ride, the paramotor tandem glider with the best handling we have flown so far. The Charger is their new offer containing all the “know-how” in a beginner-to-progression glider that it is easy to fly and has remarkable performance. 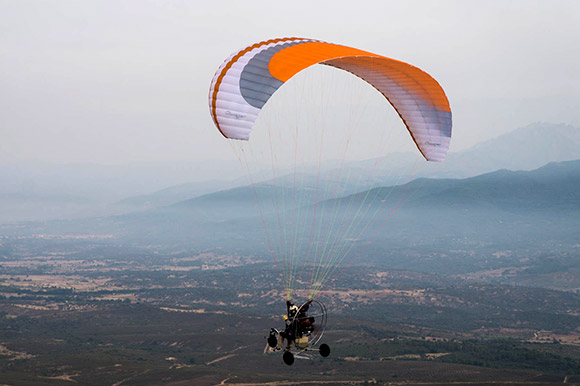 The Charger is a reflex model with thick profiles, aspect ratio of 5.14, 46 cells and high-quality internal construction with extreme care for details. It has diagonal ribs, load bearing system, miniribs, rods in the leading edge and Mylar reinforcements. Certified EN B, it is also a very easy and safe paraglider for free flight. We liked the visual proposal of this paraglider because it is a twist on the classical aesthetic of Mac Para, with stripes and curves added in a three-color design.

The Charger has superb definition, the finishes are impeccable, with clean leading edge free of wrinkles, in addition to an ever tense line of the trailing edge. The canopy design is on a different line, it has personality with a touch between elegant and sportive.

We tested the Charger in size 28 (113-160 kgs). We flew footlaunched in the middle of the weight range, with total load in flight of 145 Kg. In this configuration the glider is absolutely solid, contained in all its axes, and with very smooth handling. Flying paratrike at the top of the range, loaded with 160 kg, the sense of aplomb remains intact but the wing offers more speed and some improvement in the handling. 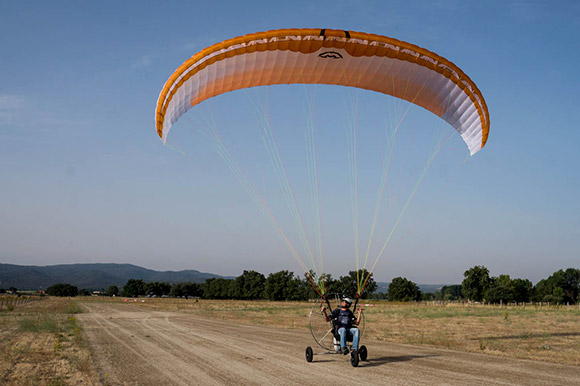 This is one of the strong points of the Charger: even the most novice pilots will manage to control their take-offs after a little practice. Just push the ‘A’ risers without releasing until the wing goes up to the vertical, and if we have been progressive with the throttle, we will not even need to hold the glider as it will stay centered, keeping the pressure and direction. Although it is a fast reflex wing, once the Charger is above the head in the takeoff run we can assist with the brakes to make the run short and easy.

Solid and efficient for covering miles

Safety and solidity stand out over other qualities of the Charger, mainly thanks to its reflex profiles. But it turns out that the profiles design is also efficient in slow mode so it does not require too much engine to take off and stay in level flight. If we open the trimmer and step on the speedbar to the top we will need almost all the power of the engine; at least that was my experience flying on paratrike with a C-Max 175 engine with a total load in flight of 175 kg, which is not bad. Footlaunched flying asks for less throttle, of course. 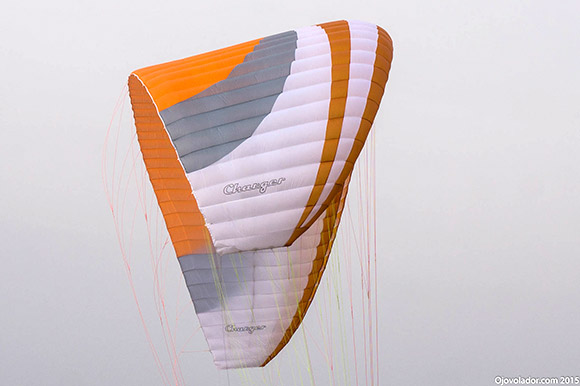 The Charger has a couple of mini-controls placed strategically low, almost at the height of the carabiners. These are used when we release the trimmer and put the wing in reflex mode, to steer the glider – instead of using the brakes. It is done this way because the use of the main brakes “deactivate” the reflex, making the glider (any reflex glider) more prone to collapses. They work great, with just a gesture and two to three centimeters of travel, we can keep the course and do minor corrections. At the beginning I thought that they were maybe too low, but after trying them in flight I found them to be very well thought out. For long flights, they are comfortable and effective. As the hands can be kept on a lower position they are less exposed to wind (cold), and it is also better for circulation.

I got very good records for a paraglider aimed at pilots since they begin in the sport: Hands free and with the trimmer in neutral, the Charger goes up to 45 Km/h; if we release trimmers we get close to 52 Km/h. The reflex works perfectly and, together with the design concept of the Charger, it gives great consistency to the glider. When we squeezed the throttle we reached +62 Km/h, a couple of km/h more with the paratrike and with no need to use all the thrust (but almost) of the Cisco C-Max 175 engine we used.

In terms of piloting, the Charger is really easy to fly and indulgent from the inflation on. It offers mild enough reactions for pilots since entry level. In spite of this it is not a dull wing nor does it lack excitement, as it has plenty of gradations to enjoy smooth and precise turns.

The Charger has progressive control and good touch, although the travel is long making it difficult to over-control. After releasing the brakes the Charger wants to go back to its neutral flying position by itself.

The trimmers are easy to adjust, and the speed system is short, soft and fully usable. If we want to fly fast there are the mini-controls that are very efficient to keep the flight direction. This and the Charger’s qualities of solidity, speed and sink rate, make it a good airship for navigations and strolls. 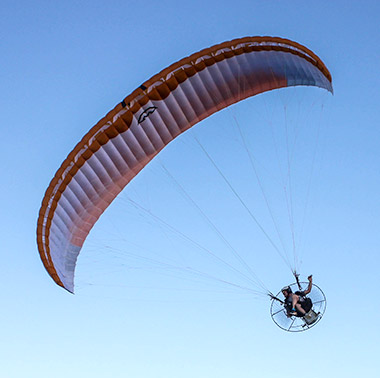 Ground control is good both doing front or back inflations, as the entire process happens “slowly” and it is easy to understand. The glider is stable on all axes and once over your head it can be controlled with little effort; it does not show any tendency to lag behind or shift to the side so, in general, it is easy to handle – also on paratrike.

This progression glider boasts a particular design: the canopy has flat arch on the centre, with wingtips that go down sharply on the sides; a design style that offers a wide area of lift and high directional stability. This configuration makes the Charger a very interesting choice for any type of navigation.

The brake of the Charger is smooth, progressive and very, very long… This glider has a calling for serene leisure flight and puts emphasis on stability and security. Its fluid turn is more “aeronautical” than pendular, drawing wide traces but in a slow and smooth way; zero stress. The more daring pilots may want to take a loop (or two) on the brakes and put some effort on them to achieve more playful turns with a sportive touch. But, definitely, if freestyle is your thing then this paraglider is not for you. 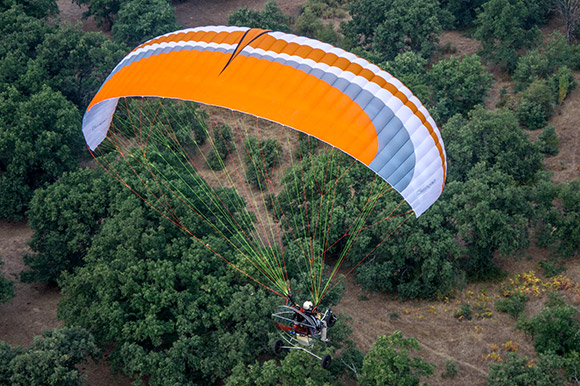 This reflex wing is aimed at a wide scope of pilots, since they take up the sport! It is a perfect glider to progress on thanks to its school-level inflation, dampened reactions and high passive safety. Nevertheless, its good speeds and solidity make it also attractive to pilots who are already experienced, and want to go out in navigations and raids at good speeds but without stress.

A paraglider with the accent on safety, the Charger offers bomb-proof reflex stability and solidity. It offers training-level take off behavior and, though the brake travel is long, it also has good handling and flowing turns. The general performance is quite good; on one side, it has good sink rate in slow flight so it does not require much thrust for short takeoffs and navigation at low gas. And on the other hand, it has a remarkable speed range that reaches 62 – 65 km/h. The best of the Charger is its ease of use and the confidence it inspires the pilot.

THE -: NO INCLINATION FOR SLALOM.