Lauri Kadakas with The Paradox 1200km in the Air

Ever since i learned to fly PPG, i have always enjoyed long XC flights and to push myself to see how far I can go. Some years ago, I had an idea, to push it further than anyone has ever done before. So I took my goal to beat the current world record – 1105 km.

Years of testing, training, improving my setup has led me to this moment. 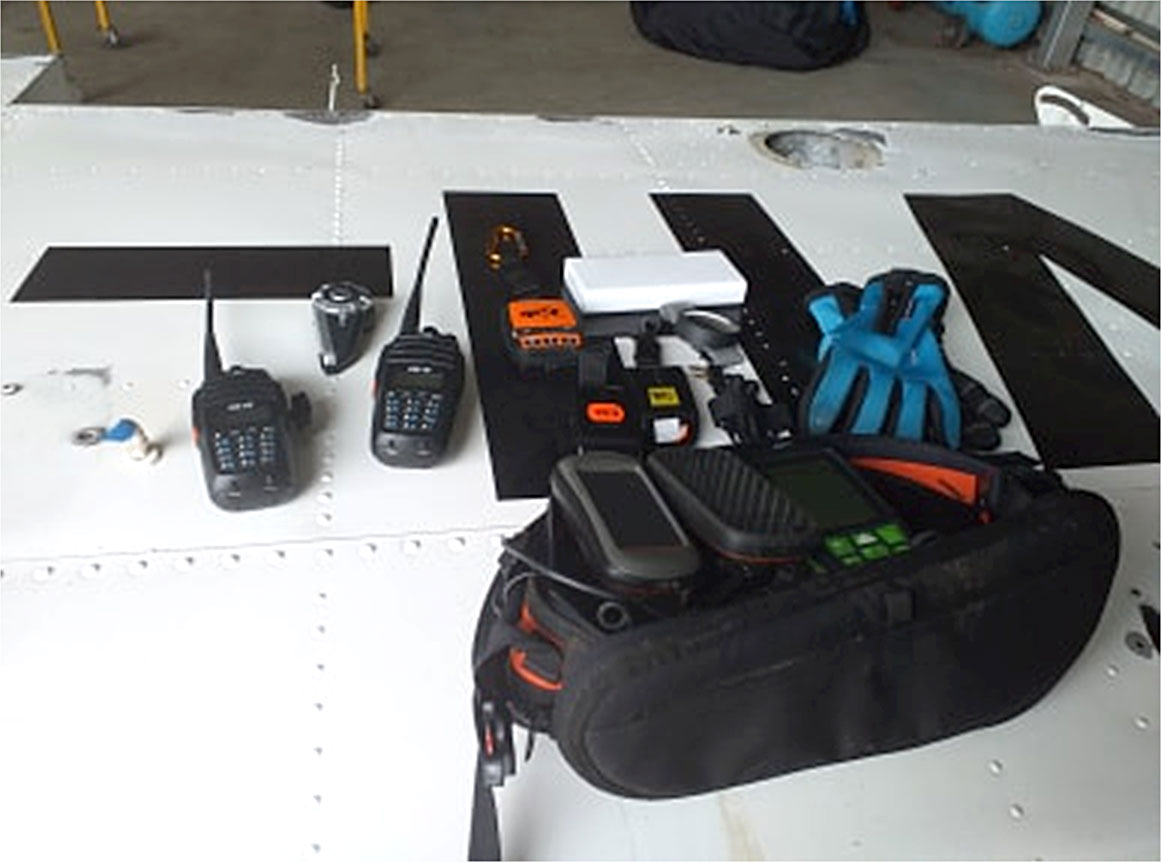 Electronics laid out for final check and battery change

Everything was set for the record.
As equipment I had: 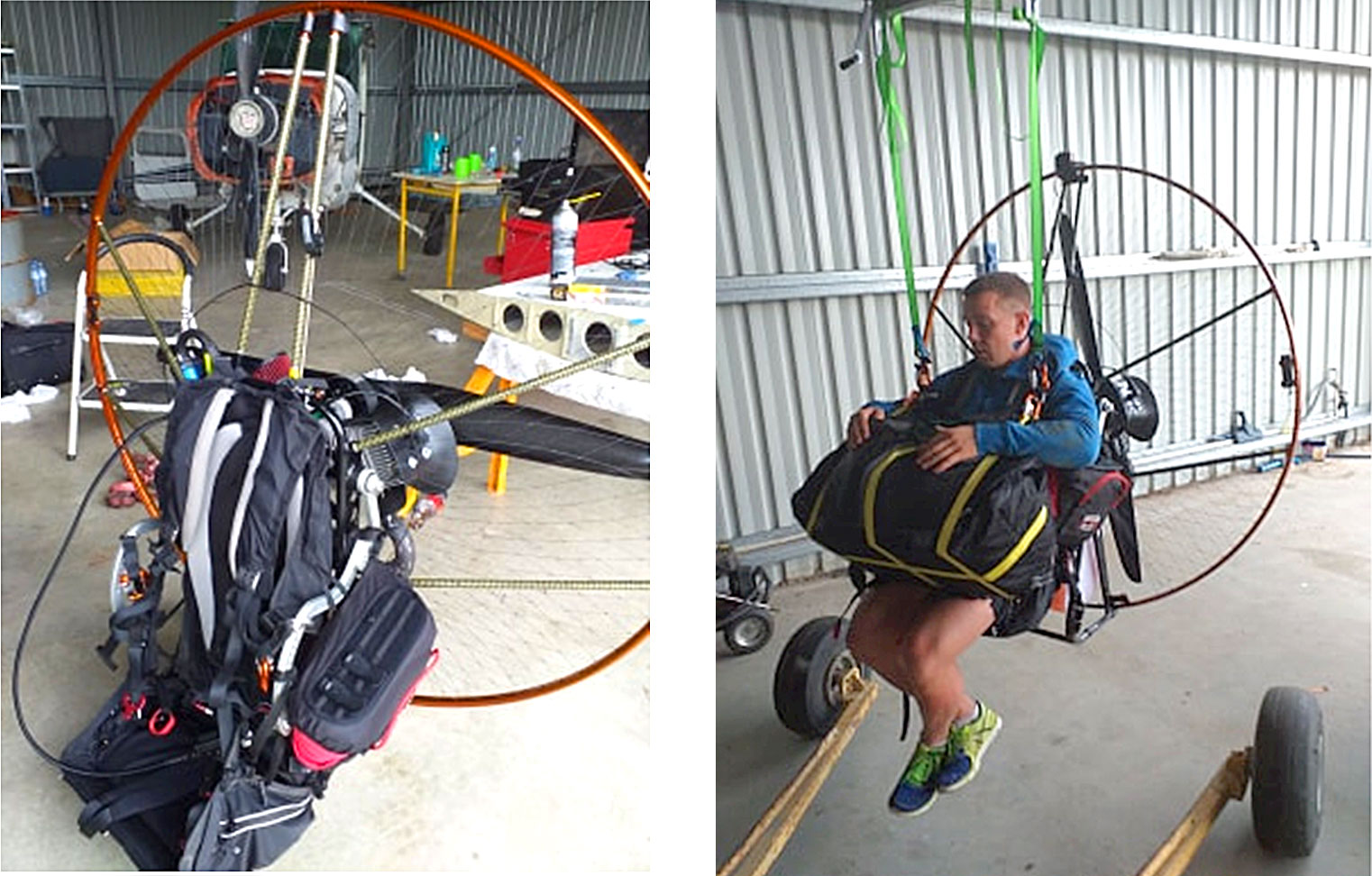 Engine and frame setup with reserve mounted on swingarm.
Testing the hang point with different fuel quantities in different tanks

Hardest part was to get the hang point just right so I would be hanging correctly with both tanks full (front and back), Front tank empty, main tank full and both tanks empty.

After succeeding in that, next challenge was to set up front fuel tank for take-off. I needed it to be high enough so it would not compromise my running and block my knees. Playing around little bit, i managed to succeed with that and jog around the airfield with full tanks and without the wing to support me.
I decided to go with main tank almost full (17l in it) and front tank to carry round 55litres.
I dint want to fill the main tank completely, because of fuel delivery system I needed the tank to be aired both ways and didn’t want to overspill while take-off.
Front tank was put into protective bag, that also made it easier to attach it to the unit.
In the morning I was going to take off, the winds started gathering force, so it was good to set everything up at sunrise.

The quick-link fuel line made it possible to set everything else up before attaching the front tank and that made getting up and moving to place a bit easier. 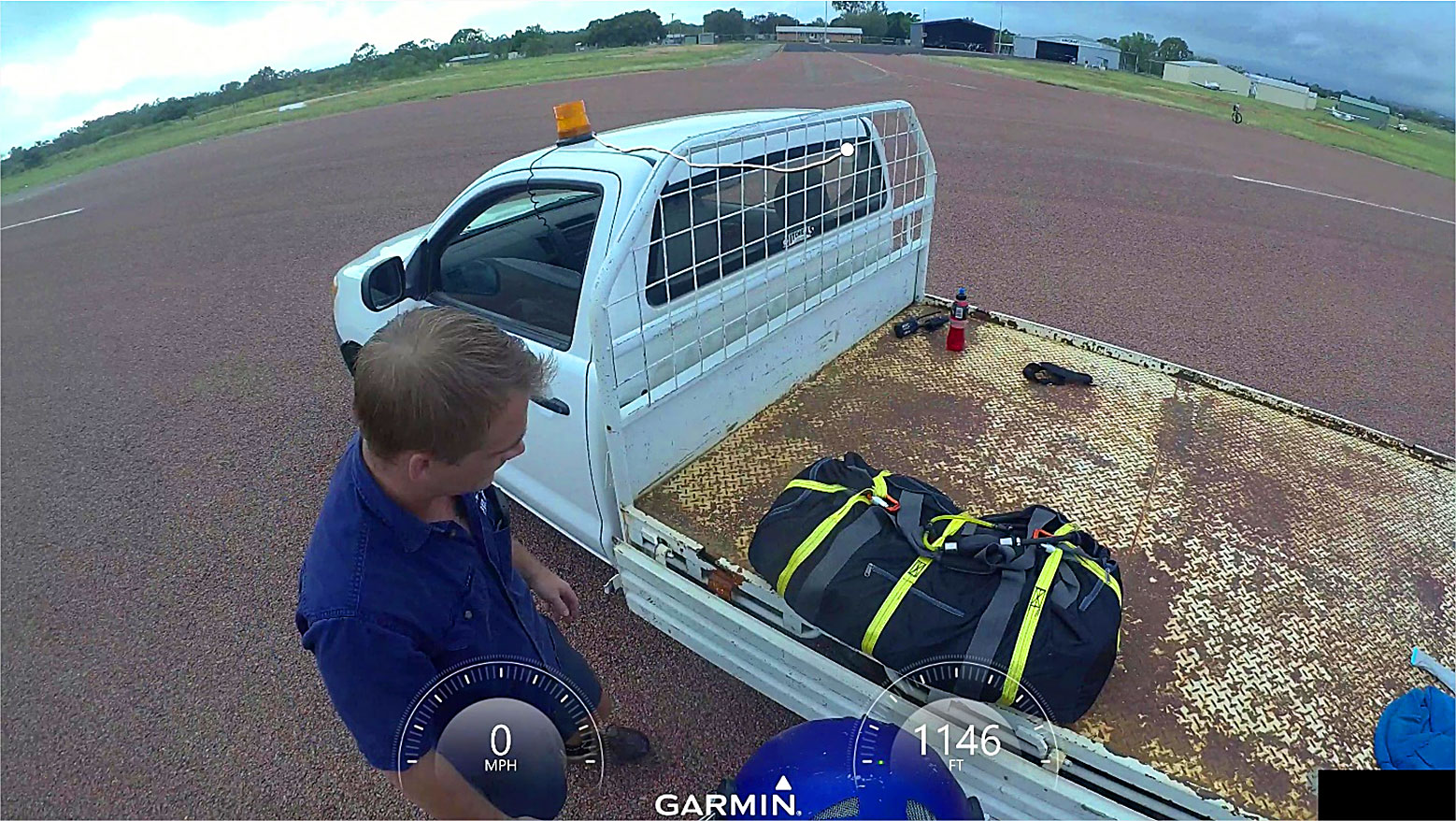 First attempt i thought it was strong enough conditions for reverse launch. I got the wing up, but while turning I managed to twist my ankle a bit and tripped. Not a big problem. had to take everything off and in few minutes I was back set up and ready for second attempt.
Since winds weren’t that strong I decided to go for a forward launch
The gusts made it a bit difficult making the wing dance above my head a bit but in general that was not a problem. The impressive lift of paradox kicked in soon as I started moving helping me in the air.
Few moments later, I was in the air. It was a hard launch but I had made it. 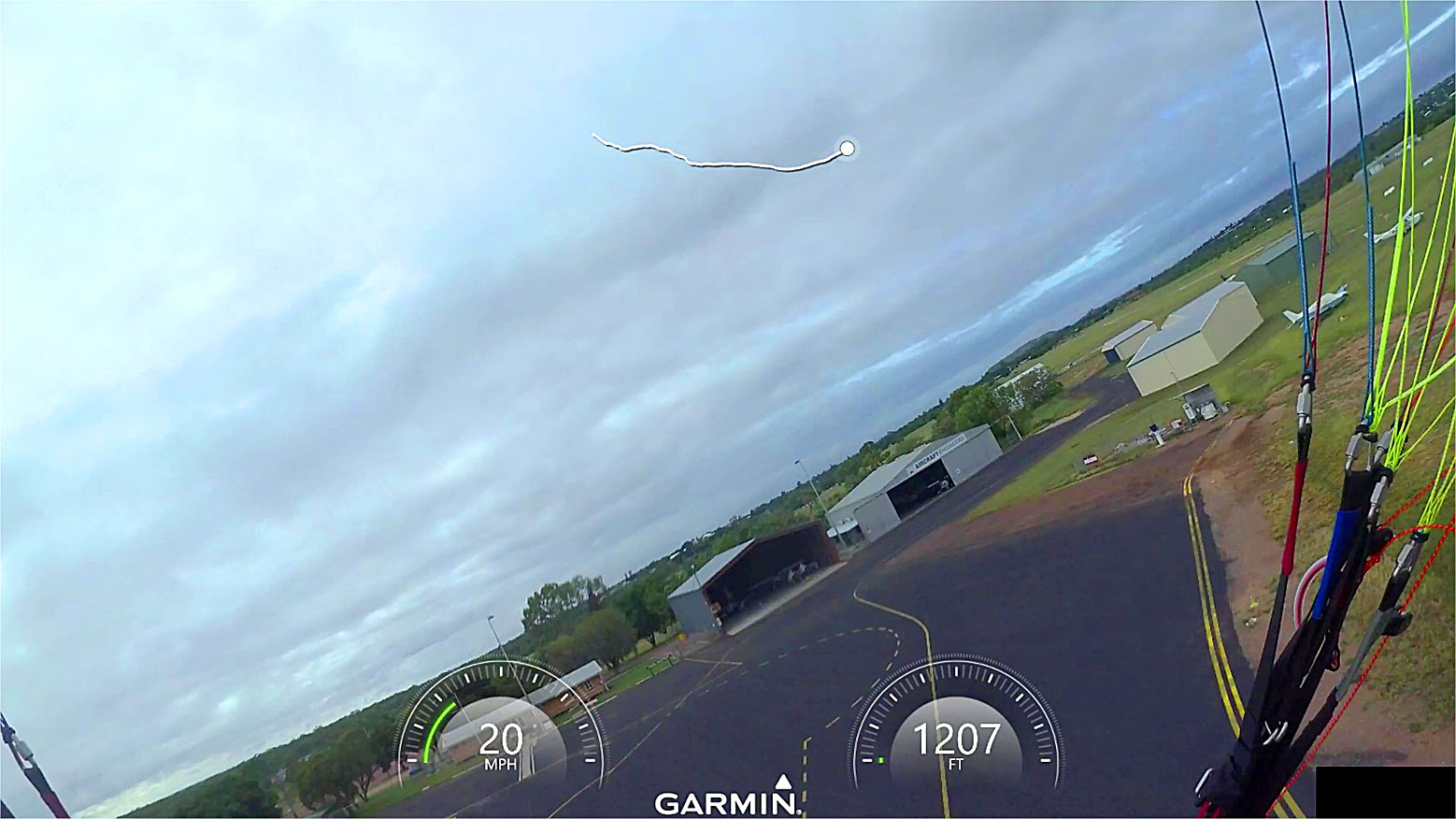 First meters in the air after hard take-off

Next hours passed slowly climbing. I had leaned out engine so much for the cruising altitude that I could not use full climb in the beginning before I reached around 2500ft above ground. Also I could not had done it because of the clouds at take-off point and up to 50km further along the route were at 3000-5000ft.
I kept climbing slowly until I reached my designated cruise altitude few hours into flight – between 7000ft and 9000 ft
When it was time to do the first fuel transfer from front tank to main, I had a small failure in planned fuel delivery. It was planned that after few pumps, the fuel starts flowing by gravity – the front tank was higher than main. This didn’t work, so entire flight, all fuel was transferred manually with primer bulb. All the 55l i had in there. Just squeezing that pump with one hand.

The weather was nice, sky fairly clear with some cumulus clouds starting to form. Even above the cloud base, already around 10am, I started feeling the thermic activity and it was tossing me around a bit. But nothing too serious to be worried of.
After passing Mount Isa, there were Cumulus clouds towering and that meant I needed to fly a bit „slow slalom“ to pass those, because there was no point or even a way to climb over those towers. 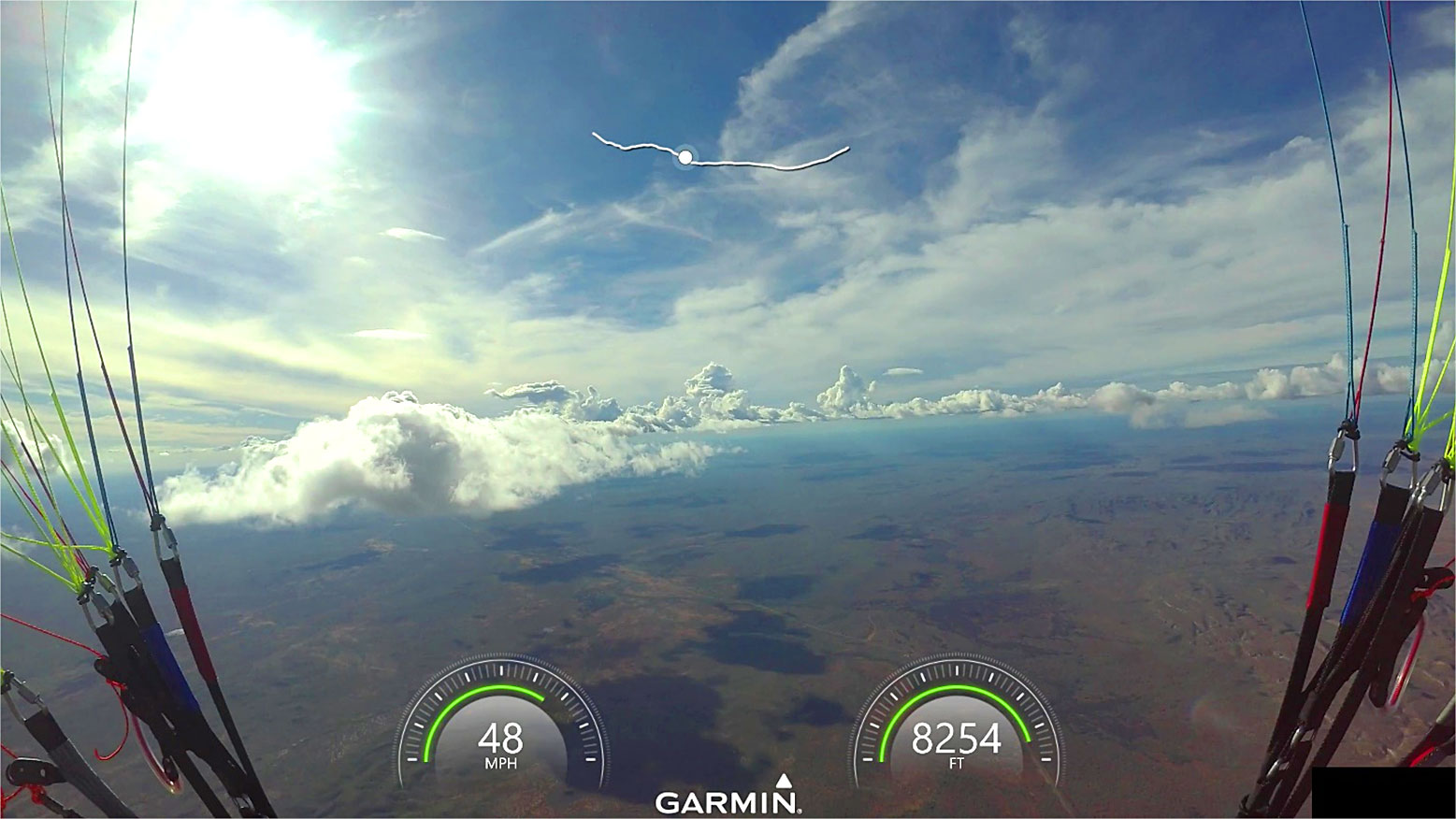 Forming “towers” in front of me.

This was also around the point that I had transferred last drop of fuel from front tank to main tank. I had used more fuel than I anticipated since I had to compensate few hours the loss of tailwind with trimmers, not to stretch the flight time. At this point I was thinking – I’m not going to make it.

After passing the clouds, I started getting gusty air and impressive tailwinds powered by an electric storm forming few hundred KM away.
That allowed me to go trims-in and still do over 100km/h easily.
Right around the current world record mark, i ran out of fuel.
I was still 4500ft AGL, so instead heading for the road, I decided to push forward as far as I can. Thus meaning I’m landing in the bush. The impressive glide of Paradox helped a lot.

Feet on the ground, I had another great feat to take on – 1.5km hike with my equipment back to road. I had Radio contact with my Chace car but since he had no portable GPS device, we decided that it’s better for me to make it out there myself and not risk getting him lost also.
Following my GPS I started walking with all my equipment – still around 50kg on my back. That was a bad idea in +37C.
I stopped, drank all my water. Took engine off my back, marked the spot on my GPS and headed out with just wing, fuel bladder and all the electronics. Even then it took me over 2h from landing to reach the road.
And then, after cooling off under aircon, rehydrating myself i was back to bush, following my GPS track and getting to engine. Engine on my back and walking out again. It all took around 3.5h. Then we started disassembly of the frame and loading it on the car.
By the time we reached first town with a motel and gas station, both had been closed for night.
Out of fuel and no bed, we camped out in the car waiting for the gas station to open.
Having had breakfast and refueled, we were ready to head back home.
It was an epic journey that I am happy that i was managed to complete. 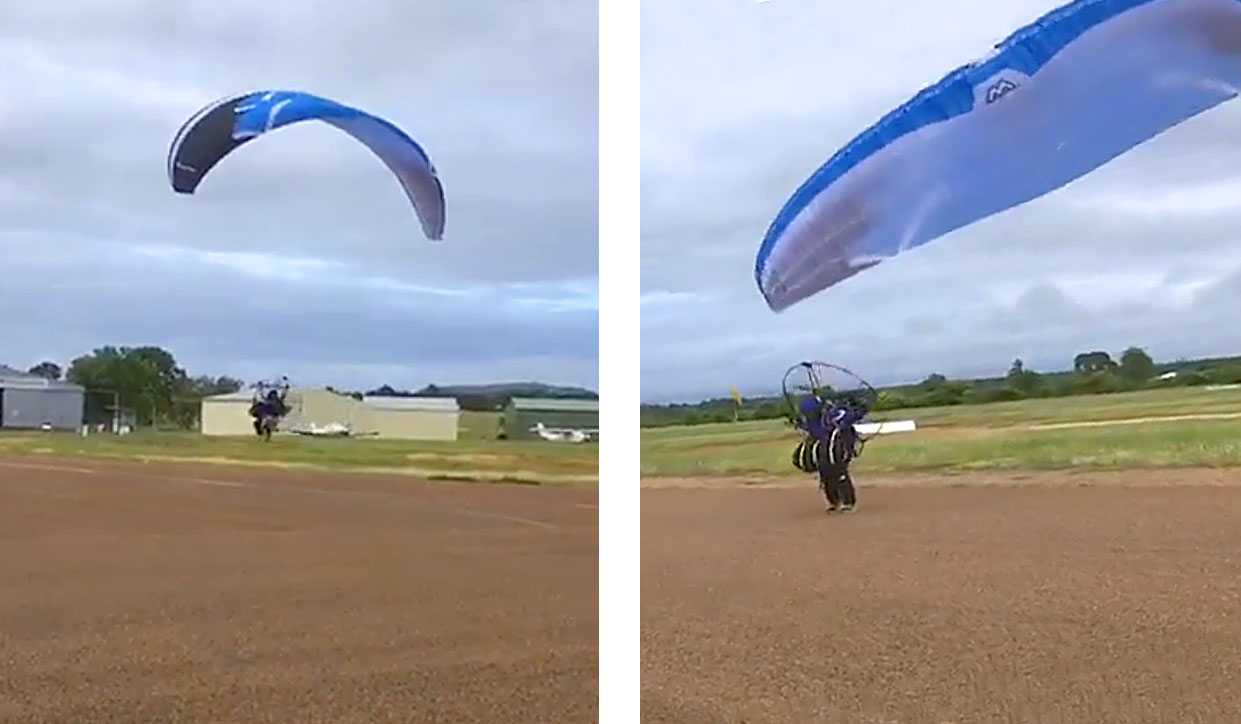 I want to give a big thanks to everyone who has supported and believed in me throughout the journey, one-way or another.

Now it is just to choose another great adventure to work towards.